The 11 Classic British Foods You Must Try When You’re In UK! If you happen to travel to the United Kingdom soon, below is my list of traditional British foods you should definitely take some time to try one of two or even all of them! Compared to UK neighbours, British food sometimes gets a bad rap and doesn’t always get the complements it deserves. French food is well-known for being sophisticated and utterly scrumptious, while Italian food is known for its real comfort, indulgent (and particularly commercial) food all across the world. On the other hand, British food is pretty similar like British weather, dull, boring, and sometimes grey (figuratively speaking in most cases) but this is so far from the truth! Trust me, there are so many delicious British culinary delights that will sweep you off your feet! 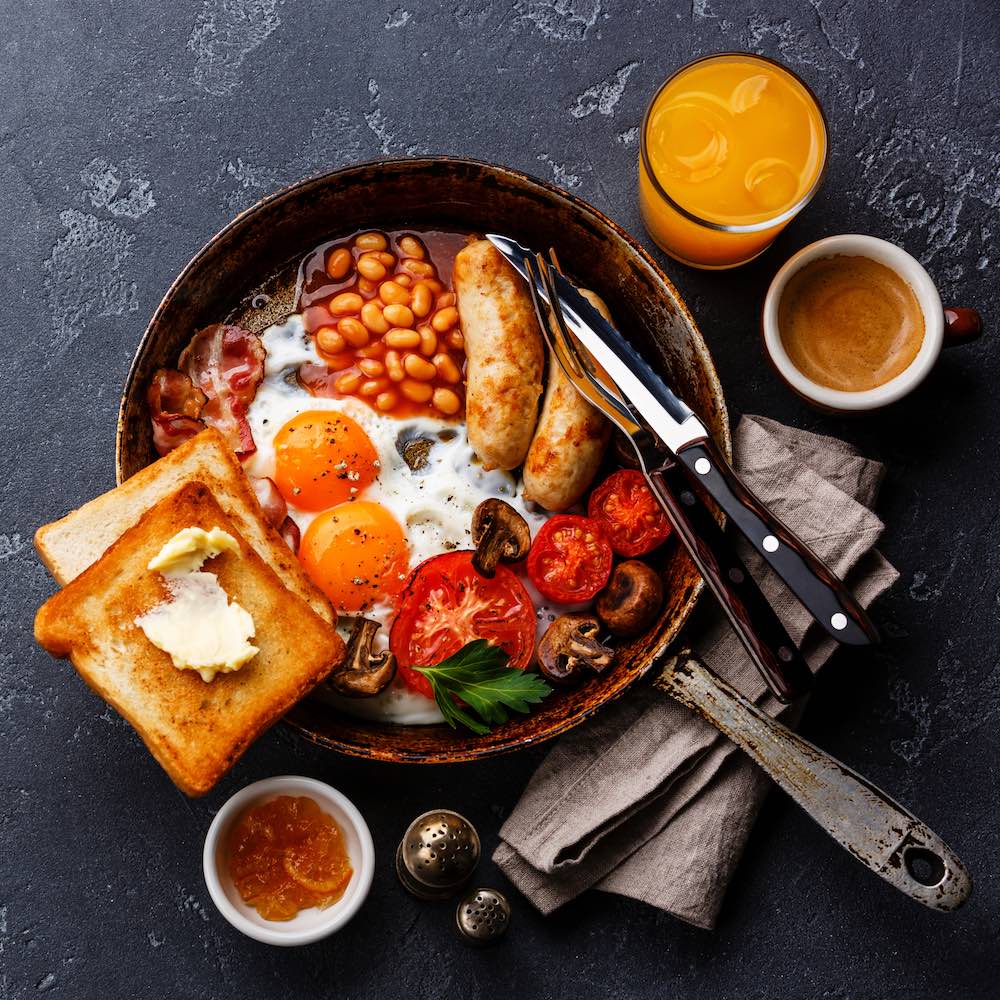 Of course the nothing gets more mandatory than having an authentic English Breakfast which is also known as the Full Breakfast when you’re in the United Kingdom. English breakfast is a mighty meal, which consists of every breakfast food you can think of! For instance, sausages, eggs, grilled mushrooms, tomatoes, beans, toast, hash browns, bacon, and tea. English breakfast guarantees to satisfy your taste! The only biggest challenge is finish off the entire plate! 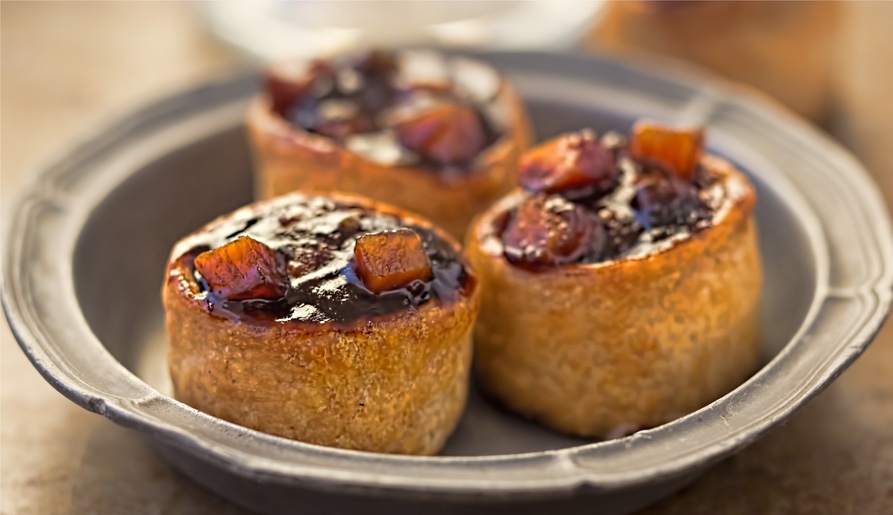 Pies! Pies! Pies! Literally just can’t get enough of them and this is easily one of the most British and of the most popular pieces! For those who love red meat, steak and kidney pie as well as pork pie are truly delicious and justifiable British favourite. However, if red meat is not your preference, you can always try their strong rival which is the Chicken and Leek pie! These pies are known for its unique round shape. These pies earn their shape from being baked free-standing and are made of meat, pastry crust, and gelatin—used to help with preservation. This simple British meal is served cold, making it especially popular in the summer. 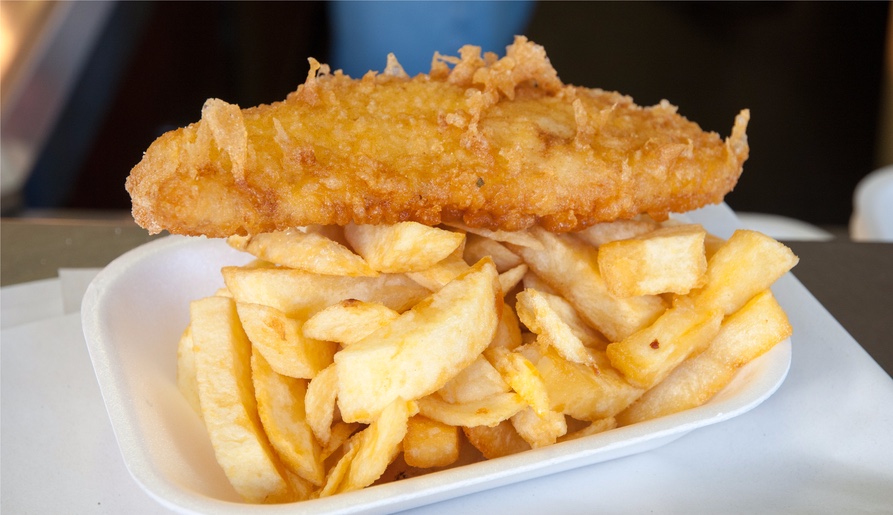 Fish and chips, which is a traditional meal since 1865, there are now approximately 10,500 independent fish and chips shops all around the United Kingdom. It is the biggest staple and most popular of all British meals.  The fish is lightly battered and then fried until crispy. Cod and Haddock are the most common types of fish used. Some of the best I’ve had have been in sea side towns such as Whitby, Blackpool but there are quite a few in London have very pleasantly surprised me. 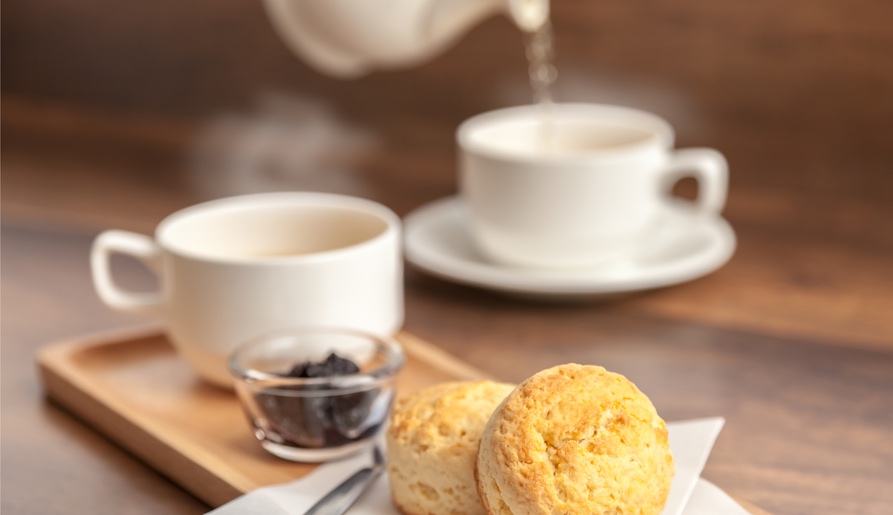 You cannot talk about food in the United Kingdom without mentioning tea, as the average British drinks three cups of tea per day and the entire United Kingdom drinks nearly 165 million cups in a day, adding up to 62 billion cups a year. Tea is a fabulous way to indulge yourself and enjoy true British delicacies. English tea usually served together with light sandwiches, scones with jam and cream as well as delicate pastries. 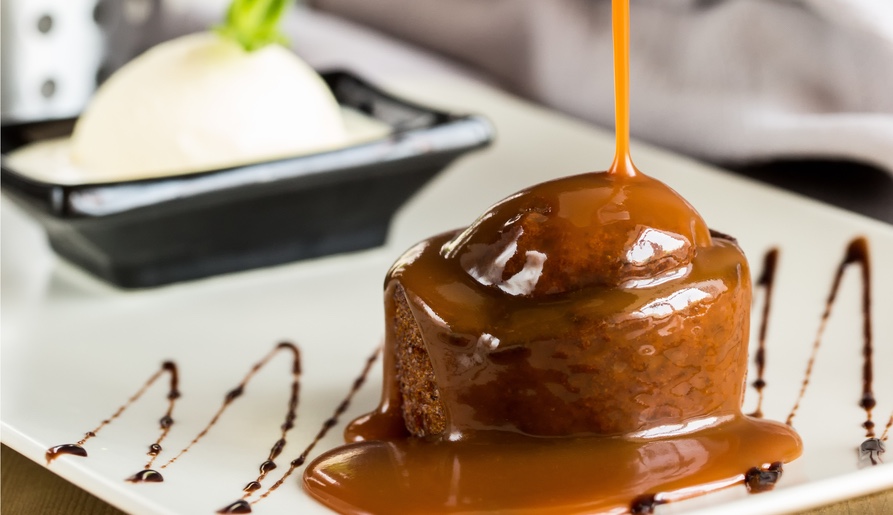 Sticky Toffee Pudding which originated from Scotland, is a moist sponge cake stuffed with raisins or dates, drenched in a toffee sauce and served with custard or ice-cream! If Sticky Toffee Pudding is done right, it is one of the most indulgent desserts in the U.K.! You couldn’t imagine how I love this! 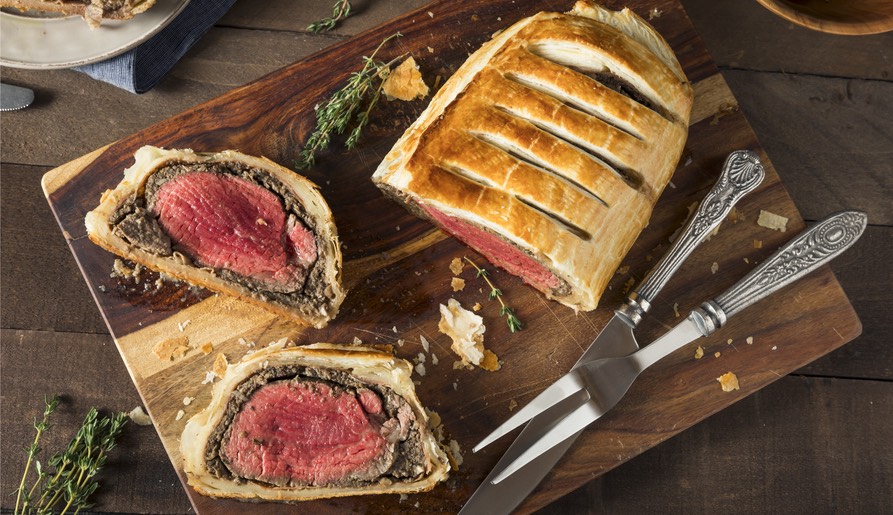 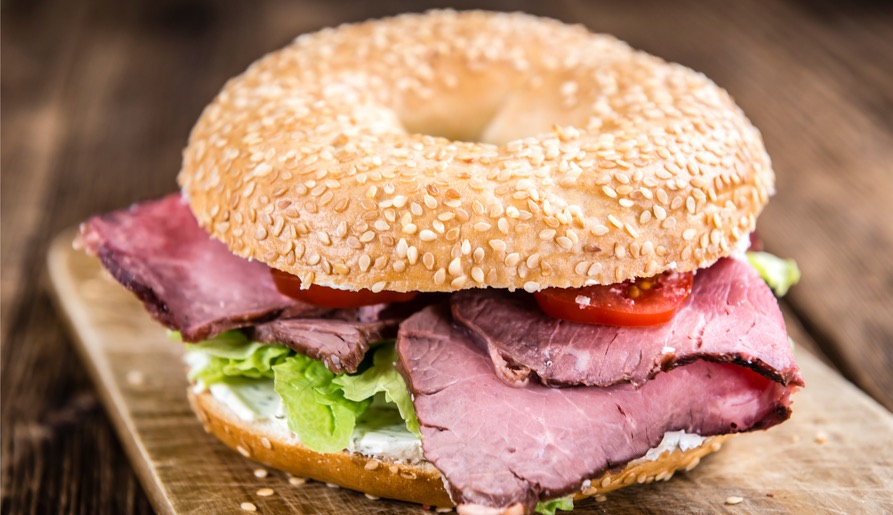 The salted beef bagel might sound nothing special but it has been an all time breakfast favourite across the UK. It was invented by the Jewish community living in East London in the late 1800s. While salted beef had been a longtime staple in British cuisine, this Jewish community altered the beef recipe and served it on fresh bagels. It’s typically quite cheap as well so it’s a good grab-and-go option if you have a full morning/day of sightseeing ahead. 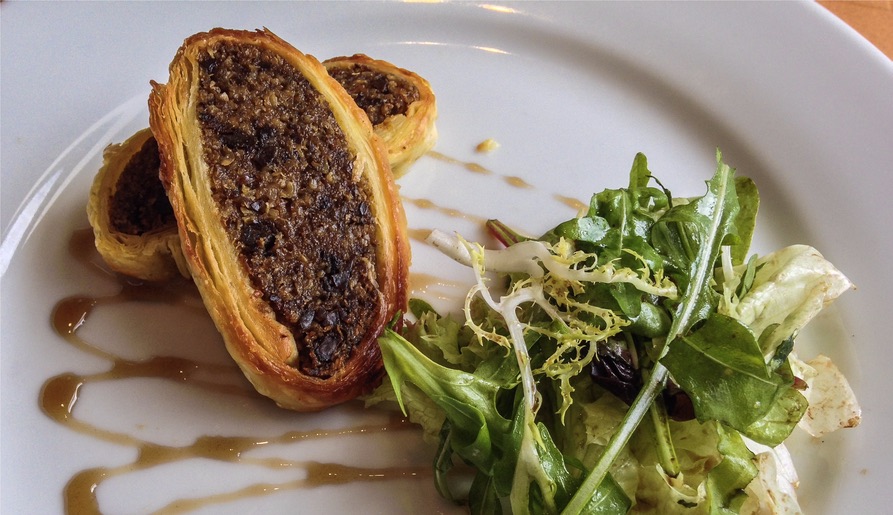 Although it might sound strange at first but Haggis is definitely the star of this show. Haggis is a tradition Scottish dish which made from different parts of sheep’s heart, liver, lungs, onions, oatmeal, spices and some stock. It effectively tastes like a spicy meaty sausage and is really quite delicious! Haggis is a dish the Scottish most proud of, and the most famous Scottish Poet, Robert Burns even wrote a poem about the dish in 1787 titled Address to a Haggis. The Scottish obsession with haggis doesn’t end there: the popular sport of “haggis hurling” involves eating the haggis after being thrown. 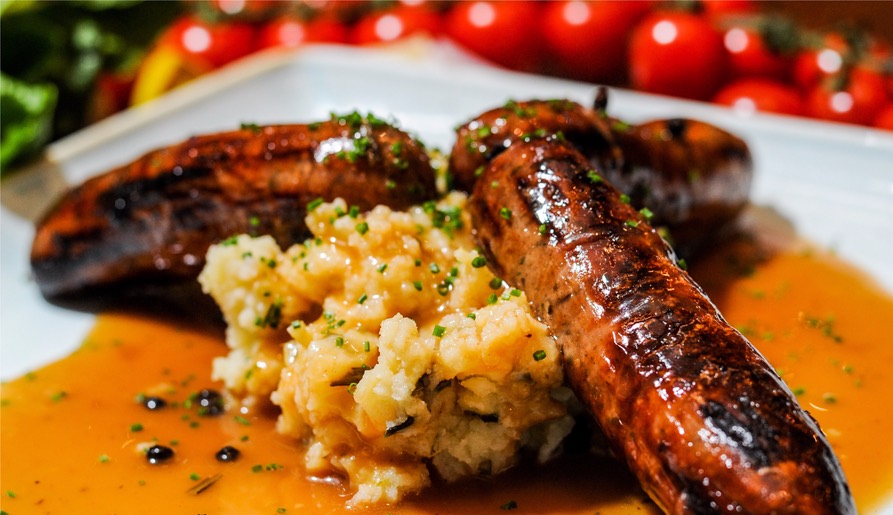 Another classic with mashed potatoes as a side dish is Bangers and Mash. One of the simplest meals to make, with only sausage and potatoes (unless you plan on making your sausages from scratch!). This hearty British staple is guaranteed to keep you full, happy and warm on a cold day! Sunday roast is a true British classic. Traditionally this meal is eaten any time from 12noon to 5pm on Sundays. Although you can get Sunday roast with turkey, beef, pork, chicken, lamb and veggie options – it’s always important to make sure you get your Yorkshire pudding! A traditional roast comes with meat, potatoes, gravy and vegetables and should be so large you find it difficult to walk afterwards! 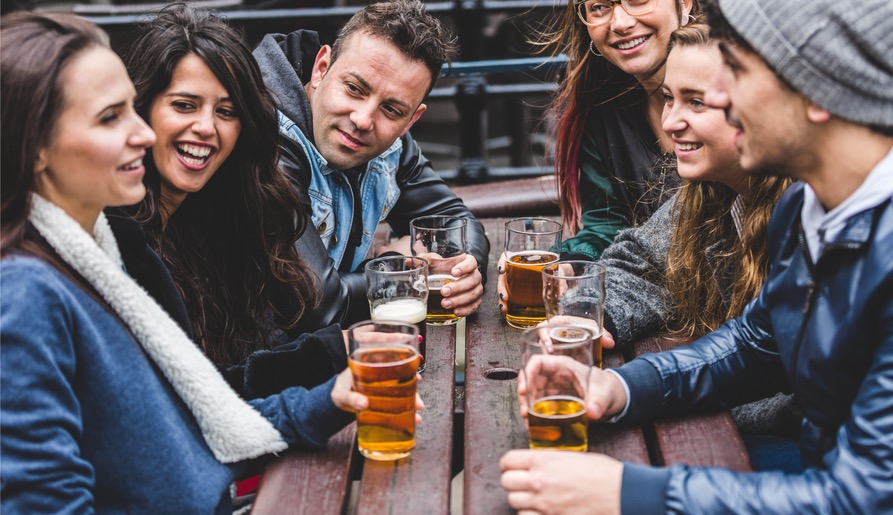 Last but not least, of course you cannot miss the land of cider, whiskey and beer! Cider which has sparkling in appearance and sweet in taste, is an alcoholic drink made from apple, but now you can find variety of options as well (pear cider, cranberry cider etc). The United Kingdom is also well known internationally for producing Scottish whisky, which is legally required to have been aged for at least three years in casks within Scotland to earn its name. For beer, it is definitely the most popular alcoholic drink in the United Kingdom.

That’s all for today’s topic. I hope this tips help you to make the most of your visit in trying all the famous U.K food.

If you’re heading to London, this guide might comes in handy.

Travel is the healthiest addicition 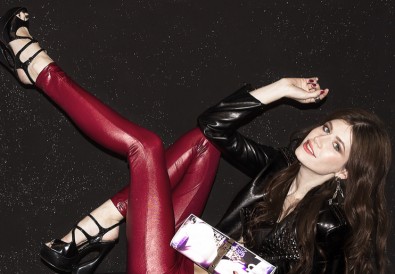 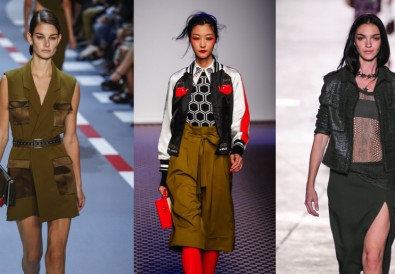 Trend Alert: How To Wear Army Green Trend This Fall

by Wendy Quah March 15, 2017
Hello, you! I'm Wendy. A millennial, fashion enthusiast, avid traveller and a music lover! "Art Has No Rules So Does Fashion"
Previous Post Next Post